No Free Treatment to any birds or animals at BSPCA, RS 400 Consultation Charges is compulsory

IT'S A PRIVATE PROPERTY NO PHOTOGRAPHY NO VIDEO RECORDING DISPLAY BOARD at BSPCA Hospital Premises.

At BSPCA, Parel Animal Hospital Dr Mayur refused treatment to a baby injured crow brought to the hospital by Ms. Reena Richard (Advocate High Court) on 27/05/2020. He said that the said hospital is a private hospital run by individuals and need to pay consultation charges of RS 400/- to Dr and refused the treatment to a baby crow.

Ms. Reena refused to pay and Spoke to Mr. S B Kadam and the other person who were in the office. Mr. Kadam also confirmed and agreed that the hospital is privatised now and stopped free treatment to stray birds and animals. He further said that since 1st March 2020 the trustees of BSPCA decided to charge all the stray animals due to the huge loss occured to the hospital. The treatment for the crow was left due to non-payment of RS 400 to BSPCA.

BSPCA has been a charitable organisation since 1874, (146 years old) the purpose of this organisation is to prevent cruelty to animals and provide help and relief to all birds & animals in the city of Mumbai.

The website of BSPCA and it’s one of the objectives of the organisation has been mentioned as ' to treat the stray animals of Mumbai city.

Ms. Reena wants to say that there was no Vet available between 2 pm to 3:30 pm and when asked the reason, they replied that due to the Pandemic Covid. Surgeons are not coming and hence surgeries are stopped. She has given a written complaint to the authorities for refusing the treatment to a baby crow which was found injured on the road.

Ms. Reena wants to reform the organisation and help BSPCA for smooth flow of the organisation with the help and involvement of higher government authorities including courts so that no birds and animals should be left unattended due to non-payment.

She requires your help to take this further, therefore she requests every animal lover to email the payment receipt if they had done so to BSPCA in the last 3 years uptill date for the treatment of stray animals and birds. The payment receipts can be email at pawaindia@gmail.com with the subject line BSPCA Payment Receipt with relevant details like your experience with BSPCA, photographs and videos with your contact details
Posted by PAWA India at 9:47 pm No comments:

Received a complaint from one of our activist Neelam in UP that the stray dogs are regularly beaten by cops SI -  Yogesh and Pardeep, during lockdown while patrolling in their area.

The above mentioned cops are so cruel to stray dogs that they injured the dog badly, one of the cop in cctv from behind  can be seen in shadow hitting the dog.

Do the stray dogs also have to follow the lockdown rules ? where will the stray dogs live ? how they will understand the law of lockdown, even if they understand where is there your home ? They are already starving with food and water and sleeps empty stomach every minute day and night and on the top of that these cops abuse them.

Mr. Salim Charania spoke to Senior Inspector (SHO) of concerned Police Station in UP, The Officer  was very gentle and humble while speaking to him and assured him that he will take strict action against the cop and will make them do their duty day and night and he will see to it that they get punishment.

Because of few bad, cruel  & corrupt -cops,  the good cops also comes under bad scanner & vision. Hear and see the attached video with audio for awareness that the humanity still exist
Posted by PAWA India at 11:09 pm No comments:

Fir Registered with the Help of Pawa India in Patan, Gujarat for Killing the Stray Dog

Fir has been registered by Patan B - Division Police Station, Gujarat. we would like to say thanks to all our fur friends who supported us  and shared our FB post which got more than 590 shares, special thanks to Ms. Manisha Salim Charania (Treasurer of Pawa India) who complaint in written to the police authority, and also special thanks to our team - Er Jignesh Chitte and Priyanku Bhatnagar for joining us in Pawa India as Smart Investigator to bring facts and information to us. Meet Amin a brave boy who stood against animal cruelty and became complainant in this case and his friend Mr. Bunty. A very big thanks to Senior Inspector and the investigation officer of this case to hear Mr. Salim Charania description about the case in details on phone. This case was almost dead with no movement, but true activism and rights give the life to justice for an innocent dog.

Complaint letter from Ms. Manisha Charania to the Police Authority of Patan, Gujarat 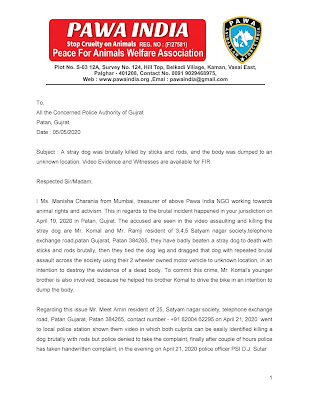 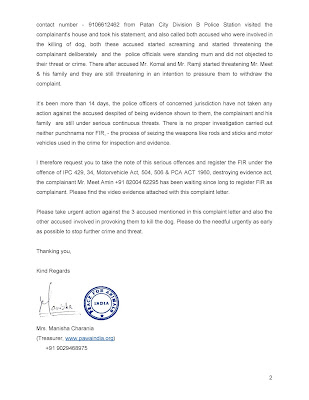 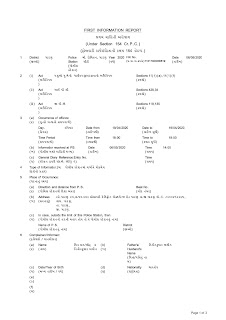 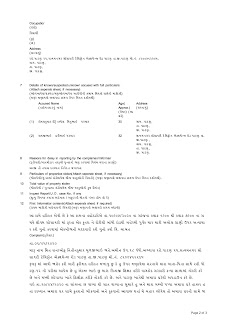 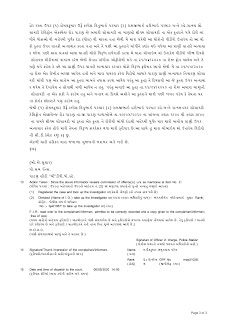 Posted by PAWA India at 8:14 pm No comments:

When announcing the nationwide lockdown to fight COVID-19, Hon'ble PM Shri Narendra Modi has encouraged animal lovers to take care of the animals who depend on them.

The Animal Welfare Board of India which is the authority for animal matters in India, being under Ministry of Fisheries, Animal Husbandry and Dairying, Govt of India, has issued a notice to allow animal lovers and feeders to continue feeding the animals dependent on them as an essential service and to prevent further public health risks due to diseases caused by stray animals falling sick and dying due to starvation in absence of feeding. 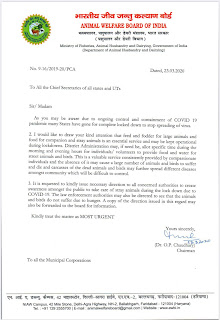 The Joint Secretary, Dept of Animal Husbandry, Dairying & Fisheries,Government of India has issued a circular to similar effect asking local and state authorities to ensure food supply to animals. 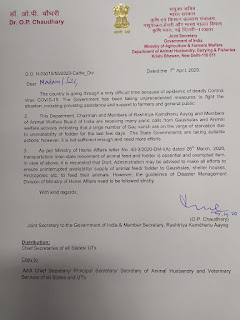 Hon'ble BJP MP Smt Maneka Gandhi has issued a notice stating that feeding animals should be continued as not doing so would cause death of animals leading to other public health problems. 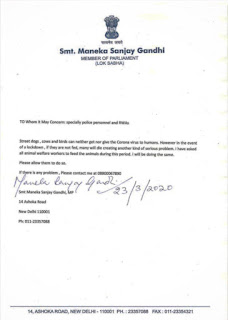 We advise animal lovers to follow COVID-19 regulations and hygiene as directed by the local, State and Central Govts and medical experts.

https://timesofindia.indiatimes.com/city/mumbai/mumbai-pregnant-cat-put-in-a-sack-by-watchmen-and-illegally-dislocated-in-malad/articleshow/73807347.cms?utm_campaign=andapp&utm_medium=referral&utm_source=native_share_tray
Posted by PAWA India at 9:00 pm No comments:

Cruelty on Birds, Tree and on Environment by Municipal Corporation of Greater Mumbai (MCGM)

When the tree butchers find a nest on the tree that they are cutting, they either throw the bird’s nest down along with the eggs and the baby birds or they chop off all the branches and leaves around the nest exposing the birds to direct sunlight and rain. Birds make their nest in such a way that the nest is sheltered from the sun and rain. The baby birds need a certain temperature to grow and be sheltered

Moreover the actions of MCGM is rendering the birds homeless! As can be seen from the Video, the MCGM is also destroying the natural habitat of the animals and birds and destroying the wildlife.

Some trees have been chopped so brutally that all other branches and leaves have been chopped off and only one branch is left with a crow and its nest with baby crows in them!! MCGM is deliberately causing cruelty to animals. It is common sense that if humans can die of heat strokes, so can birds and animals.

Many complaints have been given to MCGM to stop this illegal destruction of the Environment however MCGM does not have the decency to even reply to any of the complaints let alone take action. Complaints have also been given to police stations and the shocking sight is that when we go to the police station to give complaint about illegal chopping of trees, then politicians and thugs come to the police station to protect the offenders who destroy the environment! The contractors also take the video of the public who complain about illegal chopping of the trees!!
It is the unholy nexus between the Municipal Corporation, Contractors, Politicians and Wood Mafias.

According to the Article 48-A of the Constitution of India, the Government is duty bound to protect the Environment and wildlife. However MCGM is doing the exact opposite! MCGM is willfully, deliberately and intentionally destroying the environment and wildlife!
MCGM is causing irreparable and irreversible damage to the Environment and ecology and killing the bio-diversity of our city!
While the Ministers give speeches and pledges to contribute to protecting the Environment, the MCGM is actively destroying the environment and the ecology all over Mumbai.
Disturbing the ecological balance will pave the way for a great disaster and MCGM is orchestrating a huge disaster on us all.

Stephanie Christine Richards Reena Richard and my self as collecting evidence have taken this complaint to the higher authorities of Police and wildlife, if we don't get reply by taking action. we will move to high court against them
Posted by PAWA India at 2:20 pm No comments:

Pawa India Coming Soon in Action with an Aim to remove Animal Cruelty and  Corruption by adopting Smart Investigation Method and Techniques.

The Culprits will be punished legally under Law of Indian Penal Code by following Judiciary System.
Posted by PAWA India at 1:02 pm No comments: