ALERT & ATTENTION : The below accused ( Hair trimmer & running paid foster service) is responsible for the death of the dog at Santacruz (east) Mumbai. 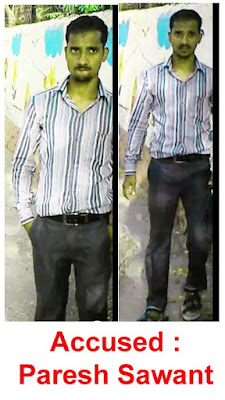 On 2nd June 2015 ,Ms Manali Samant called Mr Salim Charania (President of PAWA INDIA) and informed him about the brutal incident that took place  on 30th May 2015 in  the afternoon, A person named accused Paresh Sawant running Ekveera Dog & Cat Kennel , Lodging & Boarding  & Training Place , does  Animal Spa also .
One black breed dog which was abandoned by someone a year back, since then Ms Manali  & her family were taking care of that dog  and other fellow dogs. Someone from her neighbor society call Paresh Sawant for trimming the dog’s hair. He caught the dog by grasper and choked the dog’s neck very tightly and then tied up its mouth and legs with rope. He then continuously trimmed the hair of the dog in the hot sun for almost three hours from 2.45 till 6.00 pm in the evening. In this process of trimming the hair the dog was exhausted, breathless, suffocation gasping for breath and was struggling to escape from the tied ropes. Mrs. Samant  (Manali’s Mother) had also witnessed that the accused used Anesthesia during this process. Accused Paresh Sawant is not a professional and also not a doctor (vet) to administer the injection on any animal. Therefore there was a misuse of the Anesthesia dose.
The dog breathed his last at around 6.00 pm and was laying still, the torture and suffering were completely ignored by the accused and when he realized that the dog is not in good state and the locals were   upset he showed his fake concern for the dog and on the pretext of taking the dog to the doctor took the body of the dog in an autorikshaw and dumped into unknown location. Upon enquiring by the locals regarding the whereabouts of the dog he stated that the dog bit him and ran away on the way while being taken to the doctor and thereafter he was not reachable on the phone.
As per Ms. Manali’s statement Mr. Salim Charania and his PAWA INDIA Team ( Legally working staff Mr. Arbaaz Shaikh and Ms. Rita Anthony ) reached  Infinity Mall in Lokhandwala in their Anticruelty Van  and trapped the accused of giving him business. We confronted him about the incident occurred on 30th May 2015.
He was behaving rude, arrogant and trying to get into physical violence with the lady Ms. Manali Samant and her brother Mr. Prathamesh  who were also present with us. Ms. Manali in return slapped him and pushed him away.
Upon questioning him he confessed his crime and showed us the place where the dog’s body was dumped, unfortunately the body was already taken away by BMC on 2nd June 2015 as per statement given by the Garbage collectors of that area.
The whole incident are recorded as a video evidence and we also have medical evidence of his presence on 30th May 2015 which  will be submitted to the Police station upon request.The accused Paresh Sawant was taken to Vakola Police station and handed over to the Duty Officer and met Sr.Police Officer ,upon the request of Sr. Police Officer we submitted the application and written complaint for which he promised to take action in a week time. We trust Vakola Police Station and their Officers wholeheartedly because PAWA INDIA FIR’S are registered with them without any obstacles.

The accused called a group of his friends, advocate & some politician to support him and fight against us, heated argument took place between Salim and them, but law is law, nobody is above law.

Later Vaibhav an animal activist also join us in police station.
.
The accused was taken to Vakola Police station for the good faith and give legal justice to the innocent s dog , please make a note that  under Section 43, of the Code of Criminal Procedure, 1973 states that:
1. "Any private person may arrest or cause to be arrested any person who in his presence commits a non-bailable and cognizable offence, or any proclaimed offender, and, without unnecessary delay, shall make over or cause to be made over any person so arrested to a police officer, or, in the absence of a police officer, take such person or cause him to be taken in custody to the nearest police station."
2. If there is a reason to believe that such person comes under the [provisions of Sec 41, a police officer shall re-arrest him.
3. If there is a reason to believe that he has committed a non-cognizable offence, and he refuses on the demand of the police officer to give his name and residence, or gives name or residence which such officer hs a reason to believe to be false, he shall be dealt with under the provisions of Sec 42, but if there is no sufficient reason to believe that he has committed any offence he shall at once be released.
According to this section any private person may arrest or cause to be arrested
a) A person committing a non bail able and cognizable offence in his presence or
b) Any proclaimed offender he shall without unnecessary delay make over such person to a police officer or to the nearest police station.
The FIR will be filed soon once the investigation is completed .We promise all the Animal Lovers that the Justice will be given to the dog at the earliest and we will see to it that the accused Paresh Sawant will be announced as culprit by the court and will go to prison which he deserves for the gruesome crime he committed.
It is his negligence due to which the dog died and a life is gone.