Be aware ! You may be next, Pawa India Caught these 6 Goons who extract money in the name of Bhandara 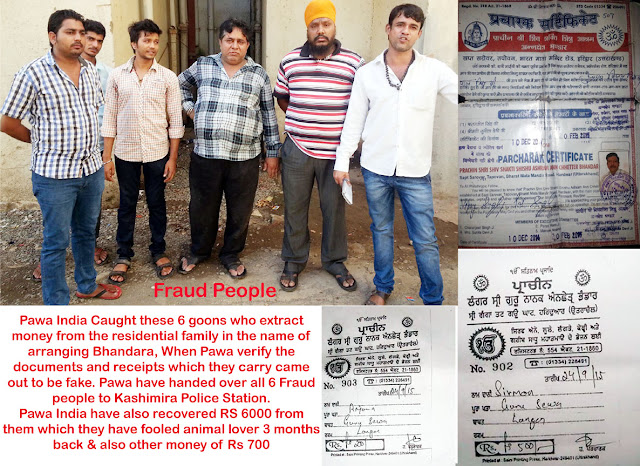 on 24th September 2015, An animal lover named Sapna, resident of Mira Road, called Salim Charania (President of Pawa India) and informed about these strangers who were on the floor of every apartment and were collecting donation in the name of bhandara which is going to be on the common area of the building, these 6 people gathered and knocked the door of the flat in the afternoon, and if they find alone woman they ask more money, they say sponsor us grain of Rs 3000 and Rs 6000 in cash and where they deny taking grains.

3 months back the same people were in the gang and knocked the door of the animal lover named Sapna, where she was with her daughter at that time, Sapna Statement : She says like something they do a type of black magic, where she gave RS 6000/- to them. Sapna narrated all this incident to Salim, He asked Sapna to keep an eye on them and if they are found again, should informed him.

Luckily they were seen again in another apartment on 24th September 2015, Salim was informed, he rushed to spot in his Animal Anti Cruelty Van and reached in 5 minutes and caught hold of these 6 people, and verified the documents which came out to be fake, Salim called up the Phone No. ( 01334226491) mentioned on the receipt, which belong to Haridwar Roorkee- II UP WEST, and verified from them they say that our people don't go in MOB and they should hold ID CARD of the Organisation, and also some of them have fake certificates and collect money, The ID card was not with these 6 goons and also the certificates which they carry belongs to Vijay Singh Pal Singh with his photo above.

These 6 Goons are not authorised to collect the money in the name of Bhandara, Salim called up Police and hold them for half an hour until Police arrived, Salim with Police took all these 6 goons in his Animal Anti cruelty Van to Kashimira Police Station and handed over to Duty Officer for further action and also he recovered total of RS 6700 cash from them which they have con from animal lover named Sapna 3 months back and handed over to her. Later Lata Parmar also join Salim in Police Station.

God knows what Mishap & Crime can take place in the form of Rape & Murder if the society people are not alert !

We request all the society people to stay alert on the illegal activities happening in the society, focus on the important issue rather than harassing animals and it's lovers.

The money recovered will be used for animal welfare by Sapna
Posted by PAWA India at 3:55 pm