FIR on vets Dr. Jagdish Patil & Dr. Amol Yamgar of AFWPS for greed and negligence resulting in death of dog

The Thane-based NGO Animal Friends Welfare Public Society (AFWPS) is awarded contracts by Vasai-Virar Municipal Corporation to carry out sterilisation of stray dogs. It is now charged with IPC 429, Maharashtra Police Act 119 and PCA Section 11 for negligence resulting in death of a female stray dog.

Whereas the AWBI and BSPCA recommends keeping stray dogs who undergo sterilisation surgery for 8-10 days for healing and observation, the dog was kept for only 2-3 days and then released without the stitches healing, which then tore open and its intestines fell out and it died painfully on the road due to heavy bleeding. 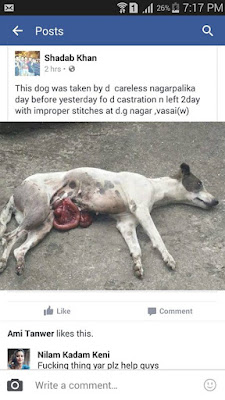 The incident begins around 6 pm on 18-09-2015, from this Facebook post. Nanda read this post and went to the sterilisation centre to inquire about the incident, but the female dog was already picked up by the centre staff. The dog was alive and was crying in pain, in a wet cage. There was nobody giving attention to the dog's critical condition. The dog died in half an hour in front of Nanda. She approached Manikpur Police Station, Vasai to lodge a complaint. The police officers accompanied her to the centre for investigation but the centre staff refused to cooperate with Nanda and the police, denying access to the dead body for Post Mortem, giving the excuse that with the permission of their seniors, the body would be handed over the next morning. Nanda and the Police returned.


This was continuously being updated on Facebook by Nanda. Salim read about this and contacted Nanda and decided to investigate the case on ground. Salim reached the police station with Nanda late at night and convinced the police to once again accompany them to recover the body of the dog from the centre. The centre staff initially refused to open the door even to talk and then continued giving the same excuse. Salim argued that the stray dog's body was not owned by the centre, but had to be handed over to authorities for investigation, and after much argument, Panchnama was carried out and the body was sent to BSPCA for post mortem.

Below is the PM report given by BSPCA after few days: 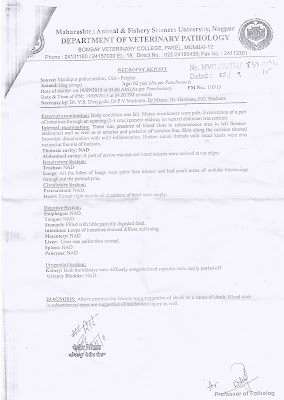 In the meanwhile, Salim was investigating the AFWPS staff and veterinary doctors, and he collected crucial evidence in the form of audio and video recordings which helped strengthen the case.

These recordings were handed over to the investigating Police Officer.

The telephonic conversation shows the negligence of the NGO / centre, including negligence of vets compromising the safety of dogs in post-surgery recovery stage as well as food and stay, to accommodate more dogs for generating more income - for sterilisation surgery they are paid a fixed amount per dog by Municipal Corporation.

The police asked the BSPCA to form a committee to investigate the negligence. The committee gave a report that the death was due to surgery being performed 3-4 days prior to death and that the dog was released on the road earlier than it should have been due to which the dog's stitches opened and its intestines fell out and it died due to bleeding.

The report also mentions that sterilisation operations should be followed by minimum 8-10 days of post-operative care or until the dog fully recovers if more time is needed.

After a continuous follow-up for one year finally the FIR was registered on 30-07-2016 against the above accused. The Police is going to soon take action, resulting in arrest of the accused, on the basis of the FIR, evidence and witness statements.

The audio recordings show their negligence. The dogs are treated as a commodity to be processed in a factory and not living patients. And upon questioning everyone is passing the blame to others.

For example these statements:
"Doctor has instructed that the cage of a dog must be emptied on 4th day and new dog must be put in the cage the next day."

"Doctor says to release in 4 days whether or not stitches wound has dried.
Staff cannot take responsibility of dog release (because it is the doctor’s responsibility and orders)"

Dr. Amol says "Daily 20-25 dogs are operated"
But we know that they do not have more than 30 cages, so they would need 200-250 cages if they kept dogs for 8-10 days each. So how can they keep each dog for 8-10 days in these limited number of cages? This indicates that the dogs are released in 2-3 days so that they can operate on more dogs and earn more money putting the stray dog's life at grave risk.

Just think how many dogs would have died so far due to their greed and illegal practice violating protocol set by AWBI and committing crime under Indian Penal Code.

What should be done is that such organisations and vets should have their licenses cancelled and AWBI must de-recognise them.

We will report this to the Veterinary Council of India including Maharashtra to cancel their vet license and AWBI to ban them completely from animal welfare or any contract related with animals.

Vasai-Virar Municipal Corporation is also responsible for giving contracts to such organisations who commit such negligence to earn money from it.

We will also report this incident to them and give our opinion to ban them from contract list and choose correct contractors for sterilisation programmes without compromising quality of medical care of animals. The contract should be given not to the lowest bidder but to the organisation who values animal life more than the budget. 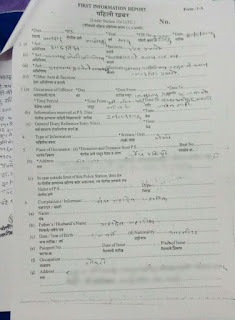