An Animal cruelty video was viral on Whatsapp and Face Book, A sleeping stray dog was hit twice using cricket bat by Abhimanyu Nimbalkar who is a student of Dr. D.Y. Patil College of Law, he shot the Video while hitting it and posted on Snap Chat.

On 17th March 2017 late evening, Mr. Abhishek Soparkar (Co-founder at YODA - Youth Organisation in Defence of Animals), called up Salim Charania (President of Pawa India, who is also a Private Detective by profession) and informed him about the viral video of animal cruelty and he has obtained necessary details of the accused Abhimanyu Nimbalkar.

Pawa India & Yoda decided to take action on the accused, so Salim met Abhishek in thane and went to Rabodi Police Station and explained the incident to the police duty officer PSI Mehendra Bamreh about the incident and animal cruelty act, Police immediately called up the accused to the police station and booked him under Maharashtra Police Act 119. Case No.211/17, Police will file charge sheet soon and the accused will be presented to the court.

Police, Salim & Abhikshek realize the accused the nature of crime, where he confess to the crime and was sorry for the act done.

We are investigating and finding more of his previous offence where he abused animals earlier too, as soon as the evidence are collected, another case will be file soon in the respected jurisdiction, from the source he seems to be repeated habitual offender in animal cruelty.

We want to stop the fashion of the youth that is happening most of the time, Today's Youth are more interested in collecting credits by doing wrong deeds which are supported by fake friends, They get engage in performing animal cruelty like hitting the helpless animals, Such acts are coward act and not a brave act.

Such people finds the easy way to get famous as performing brave act is difficult for them, so they target defenseless innocent animals. 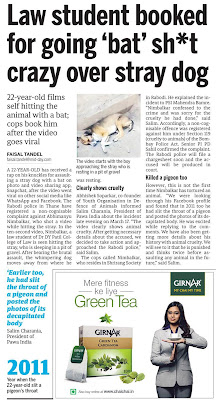 Wake up Youth and do something brave act which will help people and animals of this country. 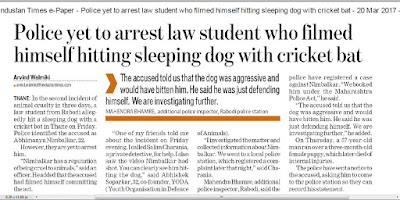