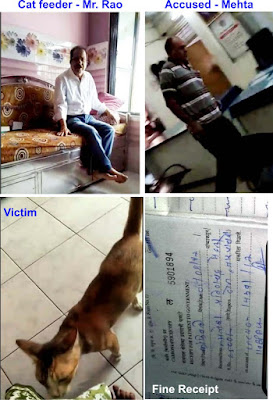 These are the words uttered by the animal abuser - Kamlesh Mehta in Kandivali Police Station.

On 05/08/2017, Salim Charania (Private Detective) received a call from Mrs. Alka Sagar an animal lover that an uncle Mr. Rao (Cat Feeder) had complained to her about the cat cruelty and she requested Salim to attend the case. Mr. Rao spoke to Salim that his neighbor Mehta is a repeated offender in animal cruelty and whenever the cat passes his door, he used to hit the cat with stick.

Salim immediately called her activist Poonam and guided her with necessary law and action to take towards Mehta. Poonam reached police station with Mr. Rao and the accused was called to police station. Mehta agreed that he hit the cat and was too rude to police and the complainer, Salim spoke to duty officer and the accused was booked under Maharashtra Police Act 119 and landed up paying a fine of Rs 2500.

He was insisting police officer to call up his society people and take complaints against Mr. Rao too, Mehta was directed to approach court.

Service Charge & efforts taken towards attending case are paid by the complainer to our activist.