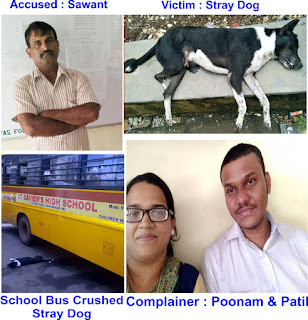 What type of education do the school gives to children ?,

The school bus driver purposely drove the vehicle on stray dog twice, when the front Tyre of the school bus crushed the dog, the people tried to stop him, but in a bit of escape, he drove the back Tyre as well on the dog killing it instantly on the spot. The dog would have survived if he could have tried to stopped the bus, the dog was alive when the front Tyre run over the dog. This brutal incident was witnessed by school children.

This is brutal education and the school authorities should educate their staff and children too that animal cruelty is a punishable offence.

The education should not be limit to only school class, but it should be extended to school staff as well.

On 04/08/2017, A School bus driver of St. Xavier's High School (Bhayander) carrying school children drove rashly and killed the stray dog in Bhayander. Mr. Rupesh Patil an animal lover witnessed the crime and immediately called Salim Charania (Private Detective) and explained him the incident. Mr. Salim immediately asked his activist Poonam Talkear to attend the case and get the accused booked for the crime. Poonam is new to animal cruelty cases but she has got good passion to learn and get the animal abuser bent in front of law.

The school principle met our activist Poonam and Police to let go the case and settle it, but we want to set an example that no one will be left whoever gets in to crime. so at one point School Bus drivers performs cruelty and at the same time he is booked for the crime, here our motto of education passing to children gets complete.

Salim continuously guided her activist and spoke to police officer too, in no time the FIR was registered under IPC 429, 279 and Maharshtra Police Act 119. The Act says jail term upto 5 years or fine or both. We got full support from Bhayander Police Station as usual. The accused Sawant was taken in to custody for investigation.

Special Vitamins were served to Driver of the bus by our activist Poonam. 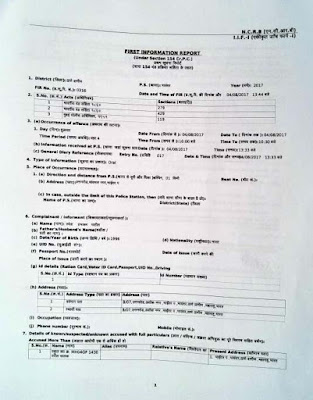