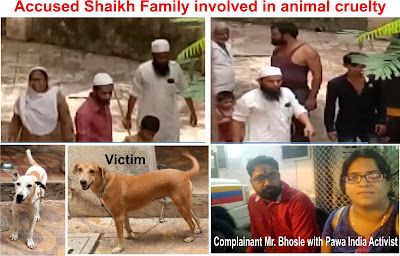 The group of people (2 women and 5 men) in the Society named Pooja CHS in Kashimira area got involved in taking revenge from the stray dogs in the society.

On 18/09/2017, the 7 accused claims that the stray dogs in the society had damage the Shaikh family Auto Vehicle, while the vehicle is illegally parked and as per society law, the commercial vehicle is not allowed in the society, the auto is on rent and it does not belong to the family.

Mr. Bhosale approached Salim Charania (Private detective and President of Pawa India) and narrated the incident, this society had a history of animal cruelty in the past, but due to noncooperation of other Ngo in Mira road, he lost the case of animal cruelty. This time he was at the perfect door for the justice. Salim investigated the matter and asked her activist Poonam Talkear to attend the case who is under the training and guidance of Salim Charania. Salim with her activist Poonam, Mr. Bhosale and the eyewitness approached Kashimira Police Station and with the good cooperation of  Senior Inspector Mr. Vilas Sanap The Fir is registered on all 7 accused under Maharashtra Police Act 119, PCA Act Section 11 and IPC 34, The accused details : (1) Sharrif Shaikh (2) Shafik Shaikh (3) Nayeem Shaikh (4) Aama Shaikh (5)A 101 Juliet Andrew (6)B 101 Hussain Shaikh (7) Mehboob Magdoom Shaikh.....

All the accused will be arrested soon, These people got booked because they showed their anger on dogs, they should understand that the dogs don't know what is seat cover, for dogs it's just a toy and since their age is under 1 year, they like to play with soft toys like seat cover, we do understand that tearing the seat cover is loss for them, but it does not mean that they should take revenge and harm them, they would have protected their vehicle by cover. Taking revenge from the animals are the act of cowardliness instead they should find the peaceful solution without doing animal cruelty.

We respect Mr. Bhosale who stood strong against the animal abuser and played a brave role as a Secretary of the building, he performed all his duties perfectly by helping stray animals and got their rights and justice to what the animals deserves. The victim stray dog is been taken to vet for medical treatment. The dogs are recovering from the pain and trauma but still in shock and fear. 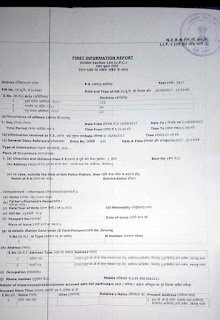