Whoever attempts to insult, abuse or harm to our people (animal lover) & our animals will not be spare in Mumbai, if the case comes to us. We are strong in every means to fix abusers in whichever language they need to understand.


On 15th Feb 2018, the video was viral on Facebook, and Salim Charania (Private Detective & Social Worker) was tag on the post and requested to take action on the person accused (Raghav) seen in the video, an animal lover Ruku Taneja confronted Raghav who tried to run his 2 wheeler vehicle on the stray dog, instead of apologizing he behaved rudely and at the end he showed vulgar sign to her by disrespecting her.

It is must to fix such psycho, the person can harm anyone, such person is dangerous to the society, and anyone can be a victim of him.

Salim Charania formed a team with activist Sonali Waghmare, Bimlesh Navani & Jeetendra Khanna, the team with the complainant approach police station and narrated the incident and requested to the duty police officer to immediately register an FIR against the accused, the action process begin immediately, the statement was taken with witness statement and the FIR was registered under IPC 509

Section 509 in The Indian Penal Code

509. Word, gesture or act intended to insult the modesty of a woman.—Whoever, intending to insult the modesty of any woman, utters any word, makes any sound or gesture, or exhibits any object, intending that such word or sound shall be heard, or that such gesture or object shall be seen, by such woman, or intrudes upon the privacy of such woman, shall be punished with simple imprisonment for a term which may extend to one year, or with fine, or with both.

We are also the witness of the video & our statement is also recorded by police.

The accused was arrested for his crime, as soon as the case will stand in the court, we will see to it that the accused must get jail term.

Currently we are monitoring the activity of the area and the people, we have a good source & the informer in the same building where the accused stays. if again something is reported which will amount to crime, the strict action will be taken again. 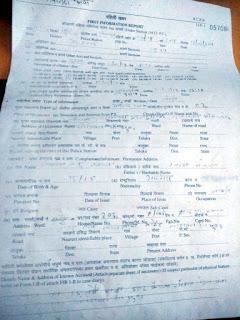