No one Will be Spared, if Animals are tortured. We follow Zero Tolerance Policy against Animal Abusers : Fir Registered : Kanakya Police Station (Mumbai) 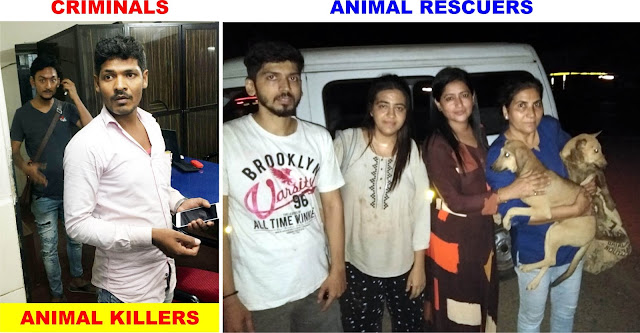 Three People (2 man and 1 woman) of Kajal Caterers in Mira Road indulged in crime committing serious offence against animals, these criminals removed their frustration on  stray dogs including puppies, who were looking for left over food where their catering service was organised. These criminals caught 4 puppies and a mother dog, tied them brutally and dumped in to tempo of Kajal Caterers, The criminals were hitting all the stray dogs caught in the tempo while travelling and were in the clear intention of killing all of them, this brutal act was witnessed by animal activist Sourabh Agrawal, and he tried to stop them, but the criminals threatened him to kill to death, and they continued their crime, Sourabh  gave them chase discretely and called up Salim Charania (Private Detective) and informed him about the incident while giving a chase, Salim Immediately rushed to help to find  criminals and rescue animals.

The criminals dumped the dog to Kinara Dhaba on western Express highway with an intention to kill all the dogs caught, the owner of Kinara also witnessed that the criminals were hitting the dog while dumping on high way. The criminals run away from the spot and could not be caught, Mean while Salim with other animal activist of Mira Road reached the location, the details which were there was only Fake vehicle registration number but on vehicle, the company name was written "Kajal Caterers" Activist tried to search the animals, but the sad animals disappear from the scene.

With just information of Kajal Caterers, Salim searched the owner number and address and with the help of Police the accused were called to police station, the accused tried to act smart and mislead police and us for the location, the accused were taken with us and he again showed us incorrect location. He showed us randomly puppies and claimed that these are the puppies and it's safe. Police asked Salim to take puppies in to his van, but something was fishy, upon further investigation it was ruled out that he was giving false information. Salim took puppies in to his van, and asked police to visit Kinara Dhabba with criminals, upon reaching the spot, the terrifying truth came out, two dead bodies of puppies were seen near Kinara Dhaba, the bodies were crushed so badly that it cannot be identified. with the help of activist of Mira road, the two dumped puppies were rescued and was given to private foster for care.

Special Vitamins were served to criminals, and the FIR is registered under IPC 429, IPC 34 and PCA Act, Animal Cruelty is a punishable offence, Jail term is up to 5 years or fine or both.

Police investigation is in progress and will soon arrest all the people involved in the crime of Animal Cruelty.

This is Mumbai, and we are stronger than animal abuser, if anyone found performing animal cruelty anywhere whether it's society or on road, or anywhere, the abusers will not be spared.

Our special thanks to reporter Mr. Vijay Singh (Times of India) for creating awareness, that animal cruelty is a punishable offence. 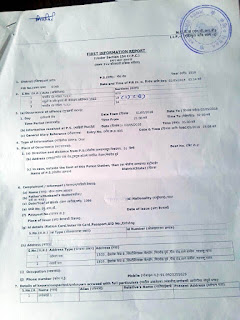 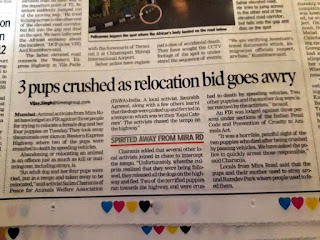 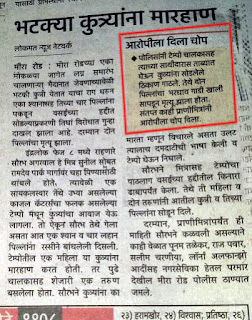